Winterbottom: No secrets to FPR resurgence 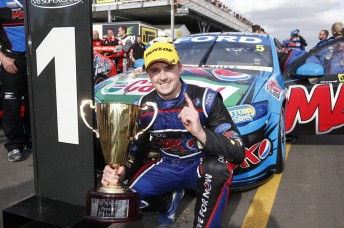 Mark Winterbottom insists there has been no magic bullet that’s enabled Ford Performance Racing to turn a tough start to the season into the championship lead in just two race weekends.

Winterbottom established a two point lead over Red Bull’s Craig Lowndes by taking a first and a second from the two Saturday races at Pukekohe.

The results follow a similarly impressive turn of speed and tyre life from the #5 FPR Falcon at Winton, where Winterbottom recorded his first win in six months.

Winterbottom’s 2014 season had started with a series of struggles, particularly in qualifying.

Consistent finishes, however, kept the reigning Bathurst winner in a solid points position.

“It’s the same car,” said Winterbottom when asked of the turnaround.

“Look at Tassie (Symmons Plains) to Winton, there was only four or five days before we were on track again, so there’s no way anyone developed their car.

“The last two tracks have suited us. If you look at Triple Eight, they were dominant in Tassie and then went to Winton and struggled.

“It was exactly the same car. I think we’ve got a better understanding of our base set-up and we’re just doing a good job.

FPR is expected to bring significant upgrades to its first private test day of the season following the next event at Barbagallo.

Although hoping to push the team’s current momentum through to the end of the season, Winterbottom cautions that Red Bull will fight back on its stronger tracks.

“They’re going to have their tracks,” he said of Lowndes and team-mate Jamie Whincup.

“It’s good to put pressure on them for sure, but there are so many good guys now that if you have a bad day… two years ago they still would have finished third or fourth, but now, the depth of the field is huge so on your bad day you look really bad.

“I don’t think they’re that far off, because they qualified on the front-row today. I’m sure their track will come, but it’s good. They’re under pressure and have to work.

“The way they win is by dominating and dictating how they want to race. Now they have to race. It’s good to put pressure on them for sure.”