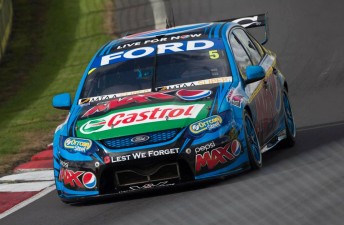 A strong start set up a second victory of the season for Mark Winterbottom and Ford Performance Racing in Race 11 at Pukekohe.

The #5 Falcon beat pole-sitter James Courtney to the first corner and was never headed for the remainder of the 100km race.

Winterbottom edged away before and after a mid-race Safety Car to take the flag two seconds clear of the Holden Racing Team Commodore.

With Craig Lowndes finishing 16th following a difficult qualifying session earlier in the afternoon, Winterbottom has closed to within 18 points of the championship leader.

“It was really good obviously the start was important to beat James off the line,” said Winterbottom afterward.

“To get the win is awesome and I put my hand up; I drove badly yesterday and I had a fair bit of redemption for the guys on the team.

“They were up all night changing bolts, uprights and rear-end (following a crash in Race 10 qualifying) and so it was awesome to turn it around with a win.”

Chaz Mostert added to FPR’s day by claiming his first podium for the factory Ford outfit in third.

The youngster had lost the position to Jamie Whincup off the start, but regained it when the Red Bull Holden slid wide off the final corner a short time later.

“I don’t think I have ever been so excited to see a third place finish,” smiled Mostert.

“It’s been a tough start to the year and to be on the podium with Frosty it’s fantastic for the team.”

The second half of the top 10 provided much of the race’s entertainment.

Van Gisbergen’s Holden eventually proved too strong for McLaughlin’s Volvo, taking the position for good with eight laps to go before running through the back chicane, with no loss of position, several times in the closing stages.

The race’s most intense battle occurred early between Tim Slade and Jason Bright.

After several bouts of contact, a skirmish at the chicane resulted in broken suspension for the former and a drive-through penalty for the latter.

Bright pitted for fresh tyres under the Safety Car, called to retrieve Robert Dahlgren’s expired Volvo from the front straight, to rescue a 12th place finish.

A second 100km race will follow later this afternoon.