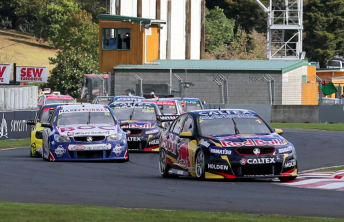 Whincup led the opening laps on Friday before the failure

Jamie Whincup believes that his chances of scoring a sixth V8 Supercars Championship title this season will soon be in grave danger if his Red Bull team does not get on top of its problems.

The problem was said to be the fifth different power steering issue that has been suffered this season across the threeTriple Eight-built Holdens run by Red Bull and Tekno Autosports.

Whincup is fifth in the standings after 10 races, now 127 points adrift of team-mate and points leader Craig Lowndes.

While 28 races remaining before the champion is crowned in Sydney, Whincup warns that another bad run will have serious implications for his prospects.

His year had started with a painful blow in Adelaide, where he was handed a drive-through penalty for a pitlane infringement while seemingly on the way to victory in the Sunday race.

“I know things happen to everyone but to take such a big hit in Adelaide and now another 50 (points), we can’t keep having these hits.

“You only get a couple (of bad results) for the year (before being out of contention) and I feel like we’ve already used two.

“It’s not over by any stretch but we’ve got to make a change, we can’t just keep on going along like we are, otherwise we’ll end up getting swamped and we need to react now.”

“We had four or five between the three cars, which is never good,” he continued of the steering issues, the first of which occurred on Lowndes’ car just minutes into the pre-season test day at Sydney Motorsport Park.

“The crazy thing is that it’s been a different thing every time. It’s not like we keep tripping over the one thing.

“It’s right on the top of our list at the moment. We’re working through it and we’ll keep working until we get it right.”

The in-race woes came after rescuing a difficult run in the single 30 minute practice session that preceded qualifying.

“I felt like we’d dug deep,” he said, having ended practice in the Turn 3 gravel trap before bouncing back to qualify second just minutes later

“We weren’t fast when we rolled out of the truck. It was a complete animal.

“I’d almost crashed earlier on but gathered it all up, and then at the end (of practice) I finally looped it and luckily it didn’t do any damage.

Whincup noted the only positive of the day being that the steering failure occurred at Turn 1, where there is plenty of run-off.

“If it had of happened the corner before we could almost be out of the weekend,” he said, having been reduced to spectator duties in New Zealand six years ago due to a qualifying crash.

Lowndes meanwhile added to his points lead with third in the Pukekohe opener, later daring to raise the prospect that Whincup’s hopes could already be slipping away.

“He’ll bounce back, there’s no doubt about that,” he said.

“But whether he’s too far gone now to bounce back and win the championship, who knows?”