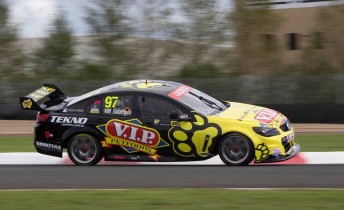 Race 12 winner Shane van Gisbergen has been docked 25 points following a clash with Jason Bright in the day’s first encounter at Pukekohe.

The pair were disputing seventh place early in the race when the Brad Jones Racing Holden was forced off the circuit by the Tekno entry.

Bright lost places to Van Gisbergen and David Reynolds in the move, before later being handed a drive-through for a separate incident with Tim Slade.

Van Gisbergen remains sixth in the championship despite the penalty, now 134 adrift of leader Craig Lowndes.

The penalty does not alter his meeting points tally for the Jason Richards Trophy, however.

The Kiwi leads those standings with 133 points after the first three races over Mark Winterbottom (118), James Courtney (109), Scott McLaughlin (107) and Nick Percat (98).