Ryan Simpson has won the opening Kumho Tyres Australian V8 Touring Car Series race for the 2014 season at Mallala today during Round 2 of the Shannons Australian Motor Racing Nationals.

Chahda grabbed the lead from the opening corner and looked set for a career best result until mid-race when a loose right-rear wheel forced him to retire on lap nine.

James Golding was the first winner in the new era of Formula Ford which proved an exciting spectacle for the South Australian motor racing fans at Mallala.

Hamish Hardeman took pole position, however it was Golding who came through to win the opening 12-lap race this afternoon. Golding started second in his Aussie-built Spectrum chassis but made the better start and led Hardeman’s Mygale into the first corner – and he was never headed from there.

Sonic Motor Racing Mygale driver Nick Rowe started third but was able to work his way to second on lap four, when he and Jake Parsons both worked their way past Hardeman – who eventually finished fourth.

The first six cars home all lapped comfortably underneath the existing Mallala track record with Golding setting a new benchmark of 1m10.40s on lap 4. The Formula Fords return for a further two races tomorrow.

Commodore driver Gavin Ross sensationally won the opening race in round two of the Dial Before You Dig Australian Super Six Touring Car Series – an 8-lap affair that had three different leaders.

Local driver Wayne King led the opening lap however an altercation on lap two saw him shuffled down the field – handing the lead to the sister VT Holden driven by Shawn ‘Jamo’ Jaimeson.

‘Jamo’ then led the next four laps before mechanical problems sidelined him and handed the race to Ross. 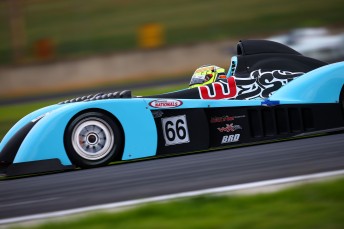 James Winslow won the opening race of the Australian Sports Racer Series, smashing the existing lap record along the way

Winslow and I’Anson battled for the lead on the opening laps but the British-born, Sydney-based LeMans Series racer was able to pull away to take the opening 15-lapper by four seconds over his West Racing teammate. Stohr pilot Adam Proctor finished third.

Records fell in qualifying today as well, with seven-time Kerrick Sports Sedan series champion Tony Ricciardello smashing his own benchmark to score pole for the opening round this weekend.

Gearbox issues hindered Audi driver Darren Hossack’s charge in the first session, though the Victorian was able to later recover and post a time 0.6s slower than his long-time Alfa Romeo-driving rival.