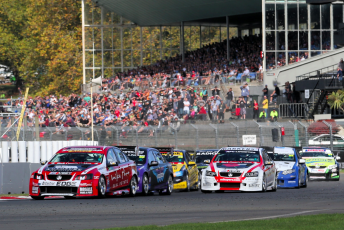 Greg Murphy has secured the 2014 BNT V8 SuperTourer Championship after scoring victory in both races today at Pukekohe.

The Mike Pero Holden pilot is now a two-time champion of the series after winning his first title in the category last year.

Moore beat Heimgartner to second in Race 1 before the positions were reversed in the second encounter.

After qualifying second for the first race, Ant Pedersen’s slim hopes of winning the title came to an abrupt end after being handed a drive through penalty for turning around race leader Simon Evans while making a dive on Murphy at turn eight.

Evans rejoined the field in 10th place before gaining four spots to finish sixth while continuously setting the fastest times on track.

“I was right on the back of fourth and fifth as well so I could see I was catching the front three.

“This was the first time we have had a good car over Greg’s, so I was looking forward to seeing if he was going to stay with me or I’d pull away, but I didn’t really get the chance to find out,” he added.

Evans’ charge through the field saw him finish ahead of Tim Edgell, Dominic Storey, Mitchell Cunningham and Morgan Haber, who rounded out the top 10.

With the incident unfolding before him, champion Murphy said the contact between Pederson and the Lynfield native was disappointing to occur in the closing races of the championship.

“Ant just got a bit excited unfortunately and thought there was an opportunity to slot up the inside of me and I saw him coming pretty early,” he said.

“I gave him as much room as I could and I was just going to make sure I was going to run around the outside of him around.

Pederson’s bad luck continued into the second race, locking up at turn five on the first lap and subsequently finishing at the end of the pack in twelfth.

Dominic Storey’s Ford crossed the line in seventh in the final race of the day, however a 40 second penalty was issued after stewards condemned a lapp 11 pass on Cunningham, placing the iSport Racing driver at the back of the field.

A crash from Valvoline driver Andrew Waite brought the second race to an early finish after suffering a tyre failure in the left front, spearing into the wall at turn ten.

While Waite is fine from the impact, the #31 entry is out for the rest of the weekend and is expected to be shipped to Australia for repairs.

The penultimate race of the V8 SuperTourer season starts at 10:45am local time tomorrow.