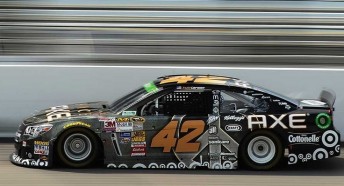 Larson will start from the pole at Richmond

Rookie Kyle Larson will start off pole at Richmond after rain swept the 0.75-mile oval just prior to qualifying.

A heavy shower and severe thunderstorm warning meant the grandstands were emptied and all personnel took cover. Larsen awarded the pole after setting the fastest time in the two practice sessions held earlier in the day.

A strong band of storms hit the track around 4pm local time, just over an hour before Coors Light qualifying. Rain has been following NASCAR in 2014 with Texas postponed a day and delays at Daytona and Bristol for the Sprint Cup, plus the Truck Series was postponed a day last week at Martinsville.

Australia’s Marcos Ambrose will start 11th for the Saturday night race which is expected to run without delays as the weather forecast is for mild weather and only a five percent chance of rain.

Next Story Ambrose in punch-up at Richmond