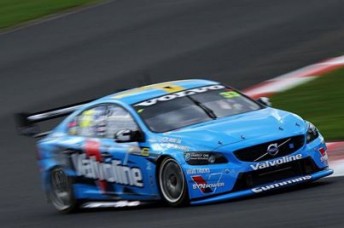 McLaughlin will start fifth in Race 11

Scott McLaughlin has been hit with a two spot grid penalty for the first of today’s races at the ITM 500 Auckland at Pukekohe.

McLaughlin had qualified his Volvo third for the race, but will drop to fifth.

He was also under investigation for contact in the pitlane with Jason Bright’s Team BOC Commodore during the day’s second qualifying where he was fastest.

The two-spot penalty is for blocking Jamie Whincup while the defending champion was on a fast lap. Chaz Mostert will now start third with Whincup elevated to fourth on the grid.

The stewards ruled no action on the incident in the pits with Bright.

Valvoline Racing GRM issued the following Tweet ‘No issues with @smclaughlin93 pole position, he has received a 2 spot grid penalty for Race 11, has moved from 3rd to 5th.’

The first of the two Saturday races starts at 2.05pm (NZ time).