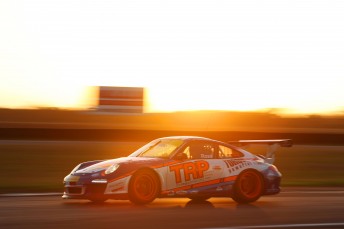 Ross, the series leader following round victories at the opening two events, held out John Goodacre by just 0.2 seconds in a thrilling finish.

John Karytinos raced home to a career-best third with Matthew Campbell fourth and first of the Class B cars home.

Ross extended his series lead with tonight’s victory and said the win was one of his best to date.

“This is an awesome way to start the Jim Richards Endurance Trophy, but it does help the title tilt as well,” he said.

“It was a very close battle in the last couple of laps and Goodacre certainly made me work for the win. It was endurance racing at its best. It was fantastic racing in these conditions; starting in the light and finishing at dusk, and to have a close finish like that made it even better.

“Jim Richards is a close friend of my family and has been a driver mentor for me for a number of years, so it would be great to have him award me the endurance trophy at the end of the season.”

The race started with Goodacre making the best start and jumping out to an early lead over Ross and Jon McCorkindale.

His moment in front lasted until lap eight, when the GAP Solutions racer momentarily slowed coming onto the start-finish straight, surrendering the lead with apparent gear-selection issues.

The local star quickly recovered and, after passing McCorkindale for second, set about chasing the race leader before a Safety Car was called with eight laps to go for debris on the back straight.

The pair were locked together for the six-lap dash to the flag with Ross doing his all to hold out Goodacre by just 0.2 seconds at the line.

John Karytinos finished a career-best third, passing his way onto the podium following the late-race restart. Campbell was fourth for a majority of the race and finished in that position as the leading Class B runner.

Peter Fitzgerald finished fifth having started from the back of the field, the experienced Porsche racing having to take a replacement tyre following qualifying.

The Porsche GT3 Cup Challenge will complete the third round of the 2014 season tomorrow with a further two sprint races.

Next Story Goodacre wins Porsche GT3 round at Mallala