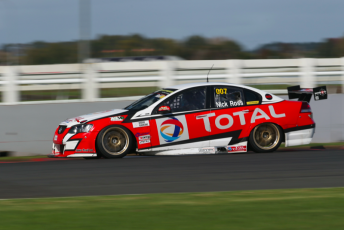 Jason Bargwanna’s NZV8 Touring Car Championship campaign was derailed by a pair of mechanical failures on the penultimate day of the season at Pukekohe.

The Toyota driver entered the day 69 points ahead of Holden pilot Nick Ross, but ended it 81 adrift with just 150 still available.

Ross capitalised on Bargwanna’s demise, scoring victory in both races and taking the championship lead.

Out of the five cars competing in the TLX class, only three reached the chequered flag in the first race, with Lance Hughes and Shaun Varney rounding out the finishing top three.

The Toyotas of Bargwanna and AJ Lauder retired with engine and drive train problems respectively.

Lauder stepped out of his car in order for Bargwanna to compete in the second race. The plan was to no avail, however, due to more engine dramas.

With Lauder out of contention for the second race and Hughes also succumbing to a DNF, only two TLX cars crossed the line, with Shaun Varney’s Ford coming in second.

James McLaughlin’s championship campaign for the TL category was also hindered by a DNF in the first race with the left rear tyre becoming completely removed from the axle after taking too much kerb on the entry into turn four.

The Lower Hutt driver managed to redeem the disadvantage from the first race, finishing third from last in the second race, following Ian Booth and Kevin Williams in first and second.

Kevin Williams, Glenn Inkster and Brock Cooley rounded out the top three in the first race, with the next race scheduled tomorrow for 11:15am New Zealand time.

In other support action at the ITM 500 Auckland, Peter Robb was able to hold on to pole position for victory in an eventful third race for the NZV8 Utes series.

The Holden driver controlled the race after beating eventual second place finisher Jack Kofoeod for the lead off the front-row.

Winner of the day’s earlier race, Kris Walton, suffered contact with another car before sliding off the track between Turn 6 and 7 that saw him drop back to 10th.

Walton managed to charge back through the field to finish fifth behind Mike Lightfoot and John Penny, who crossed the line in third and fourth respectively.

The final race for the NZV8 Utes will take place tomorrow at 12:10pm local time.