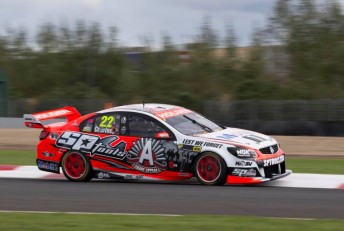 James Courtney and Scott McLaughlin took the pole positions for Races 11 and 12 respectively at the ITM 500 Auckland.

The second of the back-to-back 10 minute sessions was punctuated by a red flag with just 81 seconds remaining, setting up a scramble to the control line on the restart.

In the end, just the first three in the pitlane line-up, Garth Tander, Michael Caruso and Dale Wood, were able to put in a final flying lap.

Whincup had been on course to eclipse McLaughlin prior to the red flag, which was called to retrieve Robert Dahlgren’s crashed Volvo from Turn 3.

Nick Percat was one of three to risk undertaking just one run in the session, with the HHA Holden sneaking into an eventual sixth just seconds prior to the stoppage.

Those not so fortunate included Chaz Mostert and Will Davison, who were left mired down in 23rd and 24th respectively. The latter ended the session without a single flying lap to his name.

The Race 11 qualifying session had been somewhat more conventional, with Courtney moving 0.02s under Winterbottom’s best with 60 seconds remaining.

Winterbottom, McLaughlin and Mostert completed the top four despite each failing to improve on their second runs.

Whincup ended up doing just one run in the first session. After aborting a lap due to traffic, the Red Bull driver averted disaster by jumping from outisde the top 20 to fifth in the closing seconds.

Team-mate Lowndes meanwhile struggled with car balance and will line-up 15th for the first of the two 100km encounters. He’ll start seventh in the second.

The two races are scheduled for 1405 and 1605 local time respectively.

Next Story Grid penalty to McLaughlin for Saturday opener