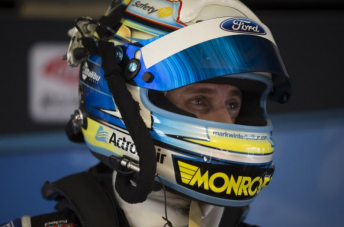 Mark Winterbottom and Scott McLaughlin traded the fastest time at Pukekohe in a practice session that ended with an off from Jamie Whincup.

The Red Bull Racing Holden brought out the red flags in the dying minutes with an off through the Turn 2/3 complex.

The car came to rest in the gravel with its nose resting against the Turn 3 tyre barrier.

Struggling with oversteer, Whincup had been just 13th at the time of the off. Crucially, the car escaped damage ahead of qualifying.

Winterbottom and McLaughlin were the pace-setters throughout the 30 minutes, with the Ford’s eventual fastest time of 1:03.50s proving just 0.08s quicker than the Volvo.

Will Davison’s Mercedes and Rick Kelly’s Nissan made it four marques in the top four.

A dry track with damp patches greeted the drivers following morning rain, adding to the challenge of finding a qualifying set-up around the fast and bumpy layout.