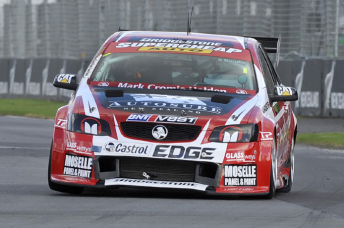 The BNT V8 SuperTourers Championship will revert to a summer competition at the conclusion of this weekend’s Sprint Series finale at Pukekohe, leaving the upcoming endurance races to kick-off its 2015 season.

Unlike traditional New Zealand motorsport classes, the V8 SuperTourer season has been contested over the calendar year since its inception in 2012.

The need to avoid the winter months has, however, ensured a large gap – this year sitting at five months – between its four sprint and three endurance rounds.

The category will continue to award Sprint Series and Endurance Series title holders, as well as an overall champion, under the new arrangement.

V8 SuperTourers CEO Ray Noonan told Speedcafe.com that the move to commit to a summer schedule for the next three seasons has been made following a request from Motorsport New Zealand.

“We were the odd man out with the whole rest of New Zealand motorsport,” Noonan told Speedcafe.com of the previous calendar year philosophy.

“All we are doing is declaring the championship (this weekend) for our Sprint Series for the 2014 season.

“We will then run the 2015 season starting with the enduro series in September through to the Sprint Series finishing again at the biggest day in New Zealand motorsport with the V8 Supercars (in April 2015).

“The changes will align our championship year with New Zealand motorsport.”

Noonan also stressed the commercial benefits of the change to the teams, who will now have the sizeable winter break to work on new deals.

This year’s reduced fields, which saw just 12 cars turn up at February’s opening round, have been largely blamed on the tight turnaround between seasons.

Star driver and M3 Racing co-owner Greg Murphy has thrown his weight behind the move, saying it will also help with the championship’s promotional momentum.

“Having this big gap between the first half of the year and the second half is not a healthy way to try and promote a race series,” he told Speedcafe.com.

“I’m all for having it start in the spring/summer period and finishing it at the V8 Supercars event.

“I’m definitely supportive of it, it’s the way to go.”

The 2015 season of the BNT V8 SuperTourers will commence at Taupo Motorsport Park.

The event’s date has been pushed back from September 6-7 to September 27-28, while the Hampton Downs (November 1-2) and Pukekohe (November 29-30) events remain as previously scheduled.

Two 200km races are planned for Taupo and Hampton Downs, with a twin 250km format for Pukekohe.

Murphy is expected to wrap up the 2014 title this weekend at Pukekohe, scoring pole for the first of the weekend’s four sprint races.