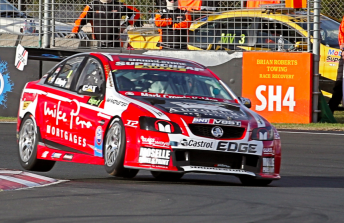 Greg Murphy has taken pole position for the first race in the deciding round of the BNT V8 SuperTourer Sprint Series Championship at Pukekohe.

Murphy’s best of 1:04.11s, set early in the 20 minute session, was enough to hold out fellow championship contender Ant Pederson.

The International Motorsport Ford driver trailed Murphy’s Holden by just 0.064s at the end of qualifying.

Although in the box seat to secure the title, Murphy says he’s expecting a highly competitive four races.

“There are a few of us that are really fighting it out,” Murphy told Speedcafe.com.

“The top three, four and five spots are fighting all the way through and that will be the same tomorrow.

“At least I have a bit of a gap (in the points) so if I’m not winning or coming second we will be pretty right, but there are a lot of points on offer this weekend.”

Second placed Pederson is 162 points adrift of Murphy with 300 left to be won and realistic on his chances.

“We might be a bridesmaid again, to be fair,” Pedersen told Speedcafe.com.

“The deficit has come about because we just haven’t had good rounds in the last three meetings.

“We haven’t maximised points as much as we should have and that’s why the deficit is there.”

Race 1 of the weekend will begin tomorrow at 12:10pm New Zealand time.​