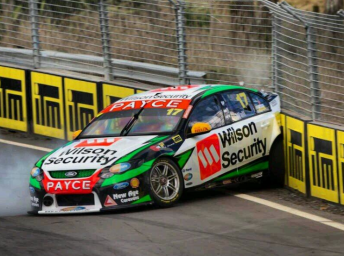 David Wall’s Falcon made heavy contact with the concrete

Dick Johnson hopes the high-speed crash that wiped his #17 Ford out of the ITM 500 Auckland will trigger a review of the Pukekohe circuit’s safety fencing.

The David Wall-driven Wilson Security Falcon spun into the concrete on the left-hand side of the circuit at Turn 10 after side-to-side contact with Chaz Mostert’s Pepsi FPR entry.

Wall reported little more than a sore thumb after emerging from the crash, but the car will take no further part this weekend.

The team will have just five days to turn the chassis around between its arrival back in DJR’s Queensland workshop and the team’s truck being dispatched for the next event at Barbagallo.

The Pukekohe circuit underwent extensive safety upgrades prior to the return of the V8 Supercars Championship last year.

Although the widespread use of concrete fencing, which was previously used at the Hamilton street circuit, is a clear improvement over the track’s old armco barriers, Johnson believes that more improvements could be made.

“Obviously concrete is a very hard thing to hit, especially at that type of speed,” Johnson told Speedcafe.com.

“It’s there for a reason and it’s better than the old armco with rotten wooden posts holding it up, but there are a lot of things around now days that can replace concrete that they should be looking at.”

Wall and Mostert each said they thought they’d given their rival enough racing room to avoid the contact.

Stewards reviewed the incident post-race but decided against taking action.

“We went around the first left and there was a light amount of contact,” Wall told Speedcafe.com.

“I felt I’d given enough room but when we went around the next left I’m pretty sure he’s hit the kerb or something and there was bigger contact with the left-hand side of my car.

“As soon as it went onto the grass I was a passenger. It washed a little bit of speed off but it still went in at almost 200km/h.”

Countered Mostert: “I’ve seen other people go side-by-side through there without a problem, but unfortunately he just didn’t leave enough room. I hit the kerb and there was nothing I could do.”

The incident was the latest in a series of mishaps that have peppered the start of Mostert’s first season with FPR.

“It’s hard; It seems like trouble keeps finding us,” he told Speedcafe.com.

“We’re trying to keep out of it as much as we can. This was just unfortunate that we got tied up in a bit of crap. It was just a racing accident, unfortunately.”

Mostert graduated to FPR this year after being loaned to DJR in order to gain experience in the championship last year.

Having unsuccessfully angled to keep Mostert for 2014, Johnson says that the succession of incidents suggests the rising star could have benefited from more miles in a lower pressure environment than the factory outfit.

“I don’t know how he’s feeling but quite frankly, maybe he needed a bit more time with us,” Johnson said of Mostert’s difficult run.

“It would have been good to have him for a little longer and it’s a very steep learning curve when you’re racing guys that have been doing it for 15 years. Experience is experience.

“Going fast is one thing but you’ve got to learn how to race and you only get that from experience.”