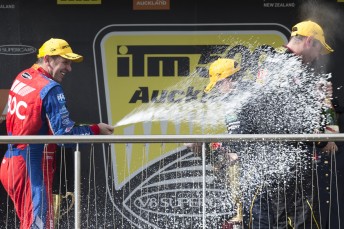 Jason Bright capitalised on a power steering problem for Jamie Whincup to score victory in the opening race of the weekend at the ITM 500 Auckland.

Starting from pole, the Team BOC Holden driver lost the front-running off the grid thanks to a sensational start from fellow front-row man Whincup.

The Red Bull Holden led the first third of the race before sliding off at Turn 1 with a steering issue. Whincup eventually finished 24th, seven laps down.

Bright was left to control the race until reaching its time cut-off two laps short of the scheduled 100km distance.

“That was a pretty good win,” said Bright.

“We have had a pretty tough start to the year and really wanted to come back and win this one.

“That is a good start to the weekend. Pole was great this morning and to be leading the points for the weekend heading into tonight is something special.”

“Brighty was driving so good then and his car was awesome as well and I couldn’t match him, but we’ll take P2 and build on it for the rest of the weekend,” noted van Gisbergen.

Lowndes’ third place finish was good enough for him to extend his championship lead to 49 points.

Second placed man in the standings, Mark Winterbottom, had been running seventh in the closing stages before dropping to 13th with a spin at the hairpin.

Side-to-side contact with Chaz Mostert had sent Wall spinning into the fence on the left-hand side at Turn 10.

The former Australian GT champion escaped from the incident, which will be the subject of a post-race investigation, unharmed.

The car will not take part in the remaining three races of the weekend.