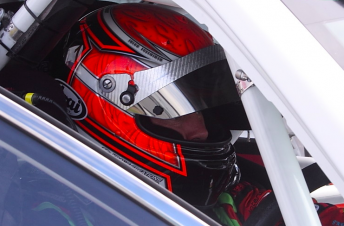 Jason Bargwanna will end a busy weekend balancing V8 Supercars driving standards duties and attempting to secure a second NZV8 title by making a firm decision on his driving future.

Set to turn 42-years-old during the weekend’s ITM 500 Auckland, Bargwanna has chased national titles on a full-time basis since bursting onto the Australian Formula Ford scene in 1995.

After moving through Formula Ford and the now defunct Formula Holden, Bargwanna spent 13 full-time seasons in the V8 Supercars Championship.

His time in the class was punctuated by a one-year sabbatical in 2008, during which he switched his attentions to an ultimately successful campaign in the Mini Challenge.

Since finding himself without a V8 Supercars ride at the end of 2011, the former Bathurst 1000 winner has turned his racing attentions to New Zealand, winning a maiden title in the NZV8 class last year.

One of very few drivers able to earn a wage racing in New Zealand’s fractured touring car scene, Bargwanna may elect to walk away at the end of the weekend.

“We’ll assess it on Sunday night and then make a plan for the future as to whether I decide to retire from it, in terms of chasing a championship, or whether we’ll try and have another crack next year,” he told Speedcafe.com.

“This is my fourth season over here and, all things going well, we’ll be able to win the title for the second year in a row.

“I’m really enjoying my role in V8 Supercar land and it may be a bit too difficult to drive as well. But we’ll wait and see. “The reality is that, if I was in a position to retire from chasing championships, it doesn’t mean that I’m not going to drive race cars anymore,” he added.

“I might drive in things here and there like historic or whatever, but it would certainly be the end of an era for me.

“I’ve spoken to my wife a fair bit about it and we’ll make a decision on Sunday night about what we’re going to do and what we’re looking for.”

Bargwanna admitted that a number of factors outside the requirements of his V8 Supercars job will play a role in his decision.

His commitments away from the track include owning and operating two Red Rooster fast food franchises in South-East Melbourne, with a third currently under construction.

While admitting that the future of the next generation of Bargwannas will have some weight in the decision, he stresses that he’s not pushing his boys into professional racing.

“What I have learnt out of motor racing is that the only way to achieve anything, it’s got to come from inside yourself,” he said.

“I’d be more than prepared to be dedicated and focussed to help them make it (a career in racing) happen, but at the moment they’re having fun and we’re just enjoying going racing.

“We’re not going to take it anything more than that at the moment, but as they get older, who knows how they’ll feel about it?

“My youngest is racing this weekend and I’d probably rather be there watching him race than be behind the wheel myself, so it’ll play into the decision a little bit,” he added.

“He’s winning races now (recently gradutating from rookies to Junior National Light) and I’m really enjoying being a part of that and seeing his excitement in it.”

Bargwanna has taken his Richards Motorsport Toyota Camry to wins in four of the five rounds held to date, but engine problems early in the season have kept the competition close.

“Realistically if we drove around and just stayed out of trouble we’ll probably win the championship, but we’re going out there to try and win,” he said after topping Thursday’s wet practice in which Ross elected not to run.

Despite an imposing schedule, Bargwanna insists that mixing his racing and V8 Supercars duties isn’t a concern.

“There is a system in place that allows me to manage both V8 Supercars Championship and Dunlop Series on the same weekend, and this will be similar to that,” he explained.

“I’m really enjoying the work in Supercars. It’s been very much eyes-wide-open for the first few races, but I’m comfortable with the way it’s panning out and the decisions we’ve made.

“I’m really confident that we’re getting it right. The feedback has been good, aside from a couple of drivers being upset with some decisions, but I don’t think that’s going to change in the short term or the long term.”


See below for Speedcafe.com’s Form Guide for the ITM 500 Auckland