Jason Bargwanna has continued his strong performance in the NZV8 Touring Cars, grabbing another pole position in the TLX class at Pukekohe.

Only 0.039s separated Bargwanna’s best of 1:06.64 from Holden driver Nick Ross, who went off the track in the last five minutes of the single 20 minute session.

The Cambridge native proved able to hold onto second place from AJ Lauder in the second of the Toyota Camrys.

Glen Inkster recorded the best time out of the TL class in the series, leading fellow Ford driver Kevin Williams into the opening race of the round tomorrow.

Bargwanna enters the round 69 points ahead in the championship, with 300 on offer over the four races. 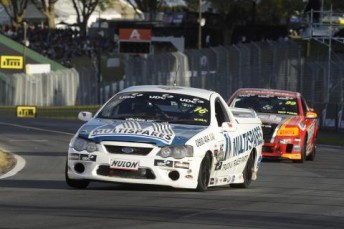 In other support action at the ITM 500 Auckland, Australian Kris Walton gained two places in the first race of the NZV8 Utes, passing Brett Rudd and Mike Lightfoot to score victory.

Pole-sitter Lightfoot succumbed to Rudd on the first lap, before continuing to fall back within the pack, eventually finishing fifth.

Sam Barry, Peter Ward, and Lightfoot completed the top five at the end of the eight lap race, while Ward recorded a new track record for Utes with a time of 1:17.39.

The NZV8 Utes second race will begin at 9:30am tomorrow, New Zealand time.​