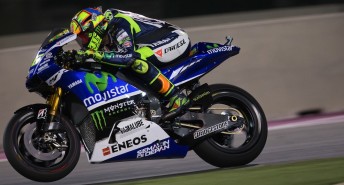 The Yamaha rider burst out of the blocks with a second place finish at the season opener at Qatar after a titanic duel with Honda’s Marc Marquez.

However, last time out the Italian threw away another podium finish at Texas‘ Circuit of the Americas as his Yamaha suffered with tyre issues.

Lying third in the championship standings, Rossi is determined not to repeat the slip up in Argentina.

This weekend the championship returns to the South American nation for the first time since 1999 with a visit to the new Autodromo Termas de Rio Hondo circuit.

“It is important to go immediately to Argentina after the weekend in Austin and try to get a good result,” Rossi, told MotoGP.com

“This is a new circuit for everyone and we have to interpret it well. It is really hard to understand now if this track will be suitable for the Yamaha as there are many variables. We’ll know after the first few laps on the track.

“I am happy with the work we are doing so far and in Argentina we will be even more focused to get good results.

Marquez remains the man to beat after securing victories in both races so far this season. The reigning world champion has been riding while recovering from a broken leg sustained just weeks before the start of the new campaign.

Although the injury still troubles him, the Spaniard has declared himself 100 per cent fit for racing.

“I think it will be an interesting weekend here in Argentina, as it’s a new track for everybody. “We need to work a little bit more than usual to find the best line, to adapt our riding style and to find the right set-up for this track. “I am back at 100% for riding, I still can’t run but I am fine on the bike.”