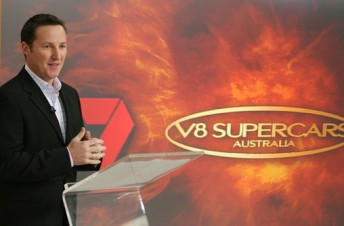 Neil Crompton will take over Matthew White’s position as host of Seven’s V8 Supercars coverage from this weekend’s ITM 500 Auckland.

It was announced last week that White will start a new role with Network Ten in July, ending his 10 year association with Seven.

While three V8 Supercars events remain before that time, Seven has elected to bench White immediately from its V8 Supercars coverage.

A V8 Supercars spokesman confirmed to Speedcafe.com that there are no short term plans to add a new member to the on-air team.

That leaves a reduced two-man commentary line-up of Crompton and Mark Skaife.

This year marks the last for Seven as broadcaster of the V8 Supercars Championship prior to the new Fox Sports-Network 10 alliance for 2015.

It is expected, but yet to be confirmed, that White will return to the V8 Supercars fold under his new deal with Ten.


See below for Speedcafe.com’s Form Guide for the ITM 500 Auckland