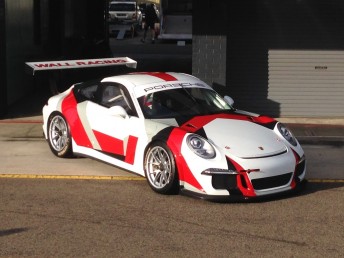 Multiple championship-winning team Wall Racing will run Barton Mawer as it makes a return to the Porsche Carrera Cup Australia.

Wall Racing has confirmed it will field Mawer from the Townsville round in July.

Team Manager David Wall was satisfied with the hit out ahead of its return at the Reid Park circuit.

“Bart has been a close friend of mine for many years, but not only that, he is also a great steerer,” Wall said.

“We have raced together at Wall Racing with some great results.

“We finished third and were the highest placed non-factory car at the Sepang 12 Hour and at the Bathurst 12 Hour we finished 4th outright in an older model car.

“For Bart, it is a return to the championship in which he raced in 2008, finishing 10th in his rookie year including a podium finish.”

Team manager David Fyfe said that with the experience of both Mawer and Wall to call on, car owner Greg Taylor will spend this year learning before taking to the wheel next year.

In 2009 Wall Racing enjoyed great success with David and his father Des (who tragically died after a short fight with cancer in 2012) winning the respective Australian GT and Australian Sports Sedan Championships.

Returning to the Carrera Cup series adds to an already busy year for the team which includes competing in the GT3 Cup Challenge with Richard Gartner.

It is also contemplating running another car in that series in addition to running selected Australian GT Championship rounds.