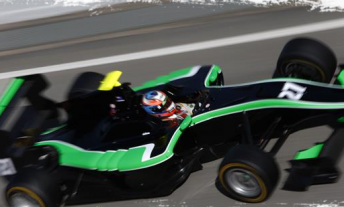 Top Kiwi Richie Stanaway will return to open-wheel racing this season after being called up to the Status Grand Prix GP3 team.

The 22-year-old’s career was turned upside down when he broke his back in a crash during a Formula Renault 3.5 race at Spa-Francorchamps in 2012.

“I am extremely grateful to Gravity Sport Management, Aston Martin Racing and Status GP for this opportunity,” Stanaway said.

“For my single-seater career, I always hoped my injury was a bump in the road, not the end of the road.

“Branching into GTs last year was an important step for me, and I’m very happy to be staying with Aston Martin in a parallel program, but I am also extremely grateful to have another opportunity on the single-seater ladder.”

On his return to racing since the crash last year Stanaway juggled Porsche Supercup duties with World Endurance Championship starts.

However it remained unclear whether he would be handed another opportunity in single-seaters.

Stanaway, a former member of the Lotus F1 junior squad, now has the opportunity to put his F1 aspirations back on track.

He will attempt to emulate his countryman and current GP2 Series racer Mitch Evans who won the GP3 Championship in thrilling circumstances at Monza in 2012.

Stanaway has previous experience in GP3, notching up several starts in 2011 including a victory at Spa.