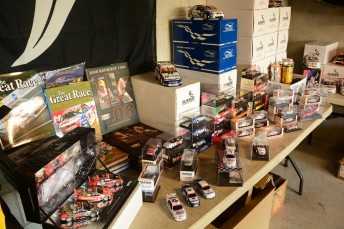 A small sample of the Murphy collection

Kiwi great Greg Murphy has announced an auction with enough items to fill two garages, including many famous pieces from his racing career.

Murphy, whose family is directly impacted by Type 1 Diabetes, is also committed to assisting the Spinal Cord Society of NZ advance vital cord blood stem cell research aimed at the reversal of this condition. A portion of the funds raised, including all profits of 20 V8 Supercar Hot Laps, will be donated to the charity.

Having recently relocated back to New Zealand from Melbourne and having to transport race overalls, limited edition prints, caps, die cast collectable cars and team apparel, Greg and his Father, Kevin realised they probably don’t need it all. Plenty of race suits to go under the hammer

“I guess all of us at one point have been surprised at how much stuff we’ve accumulated when it comes time to put it all in one place,” said Murphy. “Well, I think I’ve taken that to the limit! I can’t keep collecting and hoarding it and I’ve got my fair share of legacy items for myself and the family. If there are race fans who will get enjoyment from owning these things then I’m happy to see it go”

There is significant heritage within the array of items on offer. Including Murphy’s 1997 HRT Race overalls from his first fulltime V8 Supercar Season where he picked up his second Sandown 500 victory with Craig Lowndes. The 2002 Kmart Racing overalls from his infamous “5 minute” penalty at Bathurst. The race gear from the 2003 Bathurst pole-setting 2:06.8594 “lap of the gods” and Bathurst win. Plus the 2004 Bathurst winning overalls and those worn during the Bathurst 24 hour win with Peter Brock.

For more information on all other family activities happening on the day, including the full list of inventory items available for bid and registered expressions of interest, visit: murphhotlaps.com

Next Story Tributes flow ahead of ANZAC day race