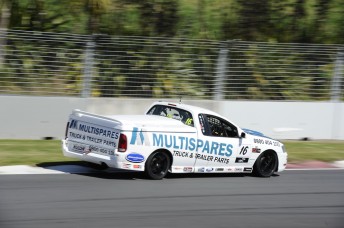 Kris Walton will try to combat what he believes is a track disparity between Ford and Holden Utes in the third round of the NZ V8 Ute Series this weekend.

Queensland-based Walton (Ford), who is a regular fixture in the series across the ditch, leads the series by 61 points going into the Pukekohe round.

At the same venue during the previous round in March Walton recorded a third and two wins from the three races to extend his lead over Kiwi driver Peter Ward.

“It wasn’t easy at the last round (as) the track likes the Holden’s better so we will have to work hard to make our car faster and get a good result,” Walton said.

“We initially got involved (in the NZ series) to try and sell some of Rod’s (Dawson) Utes but the extra laps have been great and now that Multispares have come on board for the year we are going to try and win the New Zealand Championship.”

Walton is trying to become the first driver since Chris Pither in 2010 to win both the Australian and New Zealand Series in the same year.

“That’s definitely the aim, we want to win both, we’re on-track to do it at the moment, and it’s been done before and can be done again so we’ll have a go at it.”

He is keen to take to the track for the second round at Barbagallo Raceway from May 16-18.

Next Story Greg Murphy to edge closer to V8ST double