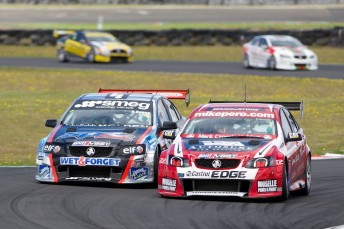 Pukekohe superstar Greg Murphy is mindful of not becoming too complacent going into the final sprint round of the BNT V8 SuperTourers championship this weekend.

However with each of the four races at the 2.91km track worth 75 points, Murphy says it is imperative not to let his guard down.

“It’s going to be go at it absolutely flat chat from the moment the green lights come on, basically.”

“The shorter races make qualifying even more important, as there is less time to overtake cars if a driver has to start down the grid.

“We haven’t been able to do as good a job in qualifying as what we would have thought since Cromwell (Highlands Park, round one) so we need to maximise that and then just race at the front and get all the points.

“It sort of fell into our lap a little bit at the last round at Pukekohe but I won’t be getting cocky about what might happen.

Tyre choice is bound to have a major bearing on strategy with each car restricted to two sets of new tyres for the entire weekend.

The V8 SuperTourers schedule will see qualifying on Friday, two races on Saturday and two more on Sunday.