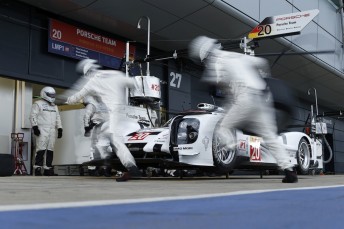 Porsche #20 being serviced on its way to a Silverstone podium

While the sister #14 Porsche first experienced a problem with the front left which parted company with the car before it experienced what is believed to be a driveline problem, forcing its retirement.

Webber was delighted at coming from sixth as the #20 appeared to have a smooth run as its unimpeded strategy unfolded.

“I’m happy to have played a small role in the effort that’s gone in from the team and everyone back at the factory to get to this point,” Webber said.

“It was a tough race for all the drivers with tricky conditions, and drizzle on slick tyres is never easy. We managed to dodge a few bullets and survived some of the tricky phases.

“We were spot on with the pit stops in terms of the tyre strategy.”

Porsche R&D board member Wolfgang Hatz was similarly praiseworthy of the first-up effort back at the top level after two decades.

“This was a proper comeback to the highest class of endurance racing,” Hatz said.

“Preparation, operation, discipline in the garage and at the wheel of the two Porsche 919 Hybrids have been very good.

“The race itself was fascinating and this shows me that the new WEC rules work well – despite or even because of the great technical freedom.