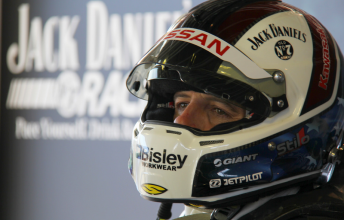 Nissan Motorsport has not ruled out joining rival V8 Supercars marques by turning up on the winner’s rostrum at the ITM 500 Auckland meeting at Pukekohe this weekend.

Nissan is the only one of the five represented brands not to have won a race in either championship or non-championship races in 2014.

Each of the Holden, Ford and Erebus Mercedes brands have been victorious from the nine Championship Series races while young sensation Scott McLaughlin supplied Volvo with early spoils at the non-championship Grand Prix meeting in Melbourne.

Nissan has endured a difficult start to its second season with the Altimas, although Jack Daniels Racing drivers and co-team owners Rick and Todd Kelly are optimistic success will not continue to evade the Braeside team.

See below for Pukekohe podiums from the 2013 meeting

The Pukekohe meeting will see three 100km races and a final 200km heat across a bumper ANZAC Day weekend at the fast south Auckland circuit.

Todd Kelly knows it is a tough ask, particularly with shrunken practice formats however considers strong pace at the circuit last year and 12 months worth of development a bonus.

“With the limited practice running, we’ll have to unload the car and be right on the money, you won’t have time to try a lot of different setups before qualifying and racing,” he said.

“As a team last year we had top-ten speed, so with a season of development under our belts, I’m confident we’ll be in a strong position.”

See below of 2014 Championship race winners so far

Nissan’s only victory since embarking on its V8 Supercars path came in controversial circumstances with a heat win for Norton Altima driver James Moffat at Winton last year amid the E70 fuel furore.

Tormented after a torrid Winton, Rick Kelly says the expectations at Pukekohe are to be challenging at the front.

“Last year when we went to New Zealand we weren’t too bad and we were still trying to learn the new car, and this year our expectations are a little higher than they were this time last year,” Rick said.

“The track itself is a very exciting one, it really does provide absolutely everything; it has one of the slowest corners of the season, it has a couple of fast sweeping corners, like turn one and the last pair.

“Obviously there are a couple of new corners in the complex over the back of the circuit, which has a new and really high grip surface.

“From a set-up point of view it’s very difficult to get a car setup that favours all of those different elements, which is a really good challenge.”