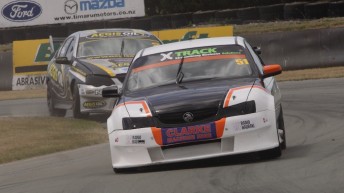 McLaughlin is leading the battle of the older TL-spec cars in his Holden Commodore which gains major backing from Realcold.

“They have come on board to sponsor the Holden Commodore for the final round and hopefully the new season,” McLaughlin said.

McLaughlin has been the benchmark in three of the five rounds and heads the points from Ian Booth and Brad Lauder.

The McLaughlin Commodore has been given extra firepower with work done to the LS-3 Chevrolet engine after being benchmarked against a rival car.

“Speedtech in Wellington ran us up against another Commodore and our car was a bit down on power and torque.

“So we have been parity tuned against that one and we are really happy with what Speedtech has done because now we are on the same playing field.”

The TLX class is led by defending champion Jason Bargwanna who has switched to a Toyota Camry this season.

A testing session kicks off the meeting on Thursday followed by qualifying on Friday.

Two 16 lap races will each be held on Saturday and Sunday.

Next Story Audi looks to use test cars for Spa