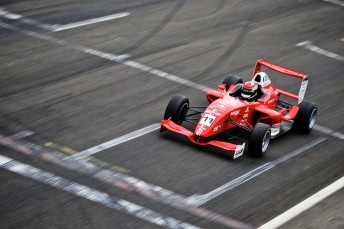 Anton De Pasquale completed a dream start to his campaign in the Formula Renault 1.6 Northern European Championship by winning both races at Zandvoort.

The 18-year-old reigning Australian Formula Ford champ showed plenty of grit to claims the double wins at the 4.3km circuit.

In the opening race De Pasquale lined up against Larry TenVoorde on the front row, a previous race winner in his second season in the championship.

After TenVoorde won the start, De Pasquale tucked in beneath him for the opening lap before making his move at the back of the circuit on lap two.

De Pasquale immediately pushed to break any chance of a ‘tow’ from TenVoorde, eventually pulling more than 3s which he maintained for the race.

In the second heat, De Pasquale again lined up next to TenVoorde, making a better start before defending aggressively to cover the inside line into turn 1.

He was never headed, and with a well sorted car and valuable ﬁrst race experience from race 1, DePasquale put in a string of consistently fast and accurate laps.

The net result was an impressive 8s lead at the chequered ﬂag, demonstrating both Depasquale’s rapid transition to wings and slicks.

DePasquale said: “I just focussed forward and drove as fast and as smooth as I could. These European guys are quick, and they don’t give up.

“I’ve learnt heaps and a lot of preparation went into every area of this weekend so I’ve got to thank Lechner Racing and all my team, and of course my family who I know are sitting up in the middle of the night.”

The Championship now heads to the legendary Spa-Francorchamps circuit in Belgium for Round 2 on June 2nd.

Previous Story International Round Up: Shedden wins at Donington