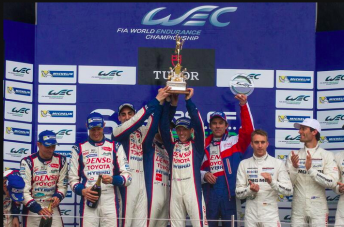 The Toyota Hybrid P1 duo began the World Endurance Championship in stunning fashion with a one-two finish in a rain-shortened Silverstone 6 Hour.

Mark Webber’s new career with Porsche began in promising style as the #20 919 Hybrid he shared with Timo Bernhard and Kiwi Brendon Hartley claimed third place after starting sixth on the grid, two laps behind the tearaway Toyota.

Both Audi R18 e-tron LMP1s were in the wars, suffering accidents and failing to finish along with the #14 Porsche LMP1 which had lost a wheel and then suffered suspension problems.

In wildly changeable conditions the all-wheel-drive Toyotas achieved their first ever quinella after the red flag was flown 30 minutes early when torrential rain hit Silverstone.

“The conditions were very difficult at the end. It was really wet and hard to stay on track even behind the safety car,” Buemi said.

“So I think the race director made the right call to end the race a little early.

“But the competition was close and we can expect another big fight in Spa.”

The winning Toyota completed 167 laps and performed six pit stops as it signalled its intention to take over the mantle from the ever dominant Wolfgang Ulrich-led Audi outfit.

Audi had a rare disaster with its #1 car suffering an early retirement after Lucas Di Grassi, who came into the team this year to replace the retired Allan McNish, crashed at Woodcote.

Later Benoit Treluyer smacked the inside barrier at Copse in the #2 Audi but the R18 had suffered heavy front end damage.

Treluyer tried to return following the accident but it ploughed into gravel where it was then stranded.

The OAK G-Drive Racing Morgan Nissan of Olivier Pla, Roman Rusinov and Julien Canal was first home in the LMP2 class, 13 laps in arrears of the outright winning Toyota.

The GTE-Pro section was won by the Porsche 911 RSR of Marco Holzer, Richard Lietz and Federic Makowiecki which beat the sister Manthey Porsche of Jorg Bergmeister, Patrick Pilet and Nick Tandy.

The next round of the WEC is at Spa-Francorchamps on May 3.