International Round Up: Shedden wins at Donington

International Round Up: Shedden wins at Donington 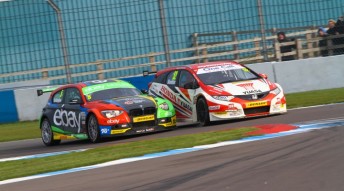 The 2012 BTCC champion was sixth during the early stages of the race while West Surrey Racing’s Colin Turkington led from pole.

However, the Honda man scythed his way through the field after winning a titanic scrap with team-mate Matt Neal and Motorbase’s Mat Jackson. Shedden then picked off Jason Plato for second before reeling in Turkington.

Triple Eight Engineering dominated a wet race one with Plato leading team-mate Sam Tordoff to a 1-2 finish, with Jordan third.

The result was reversed in race two with Tordoff leading Plato home with Shedden in third for Honda. Reigning World Touring Car Champion Yvan Muller scored his first win of the season in front of his home crowd as Citroen dominated at Paul Ricard.

Sebastien Loeb had secured his maiden pole position in qualifying but he and his team-mate Jose Maria Lopez, who was also on the front row, were forced to start from the rear of the field after a technical irregularity.

This allowed Muller a clean run to the chequered flag while Loeb produced an impressive drive to finish second. Honda’s Gabriele Tarquini was third.

Lopez showcased his skills as he claimed victory in race two after a gutsy drive from last on the grid. Muller came home in second with Tiago Montierio in third, while Loeb was sixth.

Lopez leads Loeb by 12 points in the championship standings. 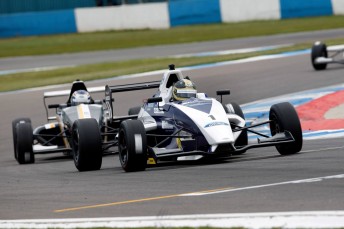 Brabham was pipped to victory in race one by South African Joe Tandy Racing team-mate Jayde Kruger, who took the chequered flag by just four tenths of a second. The result was Sam’s second podium of the year.

Race two saw Brabham surge from the rear of the field to finish fifth but there was disappointment in the final race.

After making a strong start to hold the lead, an unforced error at the Old Haiprin saw him spin into the gravel trap where he remained for the rest of the race.

Tom Blomqvist, Esteban Ocon and Ferrari Academy driver Antonio Fuoco shared the spoils in the opening round of the FIA European Formula 3 Championship at Silverstone.

Blomqvist just held off Ocon to claim victory in race one while Australian’s Mitchell Gilbert and Spike Goddard finished 13th and 14th respectively.

Ocon galloped to the chequered flag in race two before Ferrari starlet Fuoco grabbed the honours in race three from Max Verstappen and Ocon.

Gilbert finished 16th in race two and retired from race three. Goddard struggled finishing 21st in the final encounter after a retirement in race two.

World champion Laurens Vanthoor and Cesar Ramos led an Audi 1-2-3 in the Blancpain Sprint Series at a wet Nogaro in Japan.

Vanthoor and Ramos led the sister WRT Audi car of Enzo Ide and Rene Rast home in the 36 lap battle with the Phoenix Audi of Niki Mayr-Melnhof and Marcus Winkehock in third.

Finland rally star Esapekka Lappi moved to the top of the European Rally Championship standings after a dominant win at the Circuit of Ireland.

Lappi finished almost two minutes ahead of his Skoda team-mate Sepp Wiegand with Robert Barrable in third. Ireland’s Craig Breen had been pushing long time leader Lappi hard for the victory until his Peugeot 208 suffered a mechanical failure.