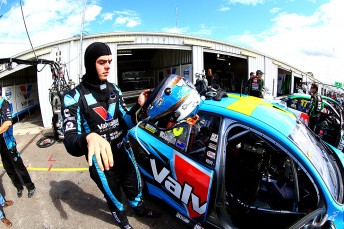 Scott McLaughlin is bracing himself to meet an even more ferocious challenge when he returns to the scene of his maiden V8 Supercars main game victory this weekend.

The 20-year-old McLaughlin heads to Pukekohe with new-found fame, propelled by the stunning early performances behind the wheel of the Volvo S60.

After stand out 2013, expectations have risen this season with the Volvo GRM driver often being touted as a contender for race victories and podiums.

His popularity among fans has also been boosted following his infamous “Give it some Jandal” phrase, becoming the slogan of the season, following an explosive post race television interview at the season opening Clipsal 500.

While excited to be racing in front of his home crowd this weekend, the GRM racer is hoping the local support can help him rise to the occasion, as he continues to adjust to his new found status.

“Its going to be weird,” McLaughlin told Speedcafe.com when asked about heading to Pukekohe as one of the event’s main attractions.

“Obviously there are three Kiwis and we only get to race at home once a year so the New Zealanders really come out and get behind us.

“The crowd can give you an edge and it can work in your favour and against you. I felt last year it helped me a lot but it gives you a buzz. When the crowd is cheering its pretty cool.

“It means a lot racing at home as I watched Greg Murphy race there when I was growing up so hopefully I can be competitive at home. It would be really cool to be on the podium in a couple of the races.

“The Jandal thing as taken off more than I thought it would.

“I have been saying it for a long time now. Its seriously cool to have a following and its nice to see people getting enjoyment from something I’ve said or done.

“I’m all for it but I can tell its getting on a few peoples nerves.”

While he is eager to delight his new found following in his homeland, there is also the small matter of the battle to finish the weekend as top Kiwi.

Fellow New Zealanders Fabian Coulthard, driving for Brad Jones Racing and Tekno Autosports Shane van Gisbergen both head into the event in form and will also have the honour of being top Kiwi in the back of their minds.

I wouldn’t say its a private competition between myself Fabian and Shane but we are all competitive and want to beat everyone as well as being top Kiwi,” added McLaughlin.

“If I have to make a big pass for the win I will but not to be the Top Kiwi. Being top Kiwi is an added bonus though.”