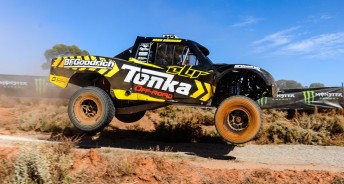 Beau Robinson and Ken Skinner struck gold in their #413 OBR Trophy Truck by taking their maiden AORC round win in the Kalgoorlie 400.

The Perth based team thrived in tough, dusty conditions, finishing in a time of 4:46m15s, picking off the twin turbo V6 powered buggies one by one in the Tonka & BF Goodrich backed V8 Truck as the five lap race progressed.

“It was tight and twisty and I thought it would have suited the lighter turbo buggies,” Robinson said.

“But we kept it consistent and had no issues, so it goes to show what a clean run can do. Everyone has done a great job with the new event and we’ll now look forward to keeping everyone on their toes at Finke.”

Reigning AORC Champions, Shannon and Ian Rentsch picked up where they left off in 2013 to finish second outright in the #1 Hogs Breath BFGoodrich Jimco.

After qualifying fourth, Rentsch had moved into secondheading into the final two laps, but was unable to haul in Robinson during the closing section to finish two minutes behind the West Australian.

“The track chewed up a lot across the weekend, in some spots the wheel ruts were deep and we were bellying out, so it was a challenge to get through sections without stopping. It’s probably one of the toughest we have raced on for a while, so it was good to get the finish.”

Matt Hanson and Leigh Wells rounded out the podium in third after a testing the weekend.

The pair won Saturday mornings prologue in the #3 Snap SMU Jimco, but then battled with turbo boost and brake issues in the top ten shootout and first lap which followed.

“It was a real offroaders track that we enjoyed once it became more settled and defined, and we really enjoyed the final section,” Hanson said.

Fehlhaber had initially piloted the #138 Karcher Prolite into third, but was relegated to fifth after a five minute penalty was applied for hitting a marker.

The 2014 Championship next heads to the Northern Territory for the iconic Tatts Finke Desert Race – more commonly referred to as the “Bathurst of the Bush” – on the long weekend of June 6-9.