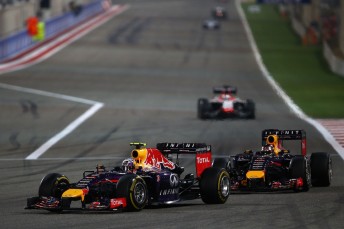 Daniel Ricciardo says he is prepared to fight for a strong result in today’s Chinese Grand Prix after again outperforming his world champion team-mate Sebastian Vettel in qualifying.

For the third race of the season, the Western Australian outshone his four-times world champion team-mate, after scooping second spot on the grid in a tricky wet session in Shanghai.

The 24-year-old proved to be the only driver to pose a threat to pole sitter Lewis Hamilton with his Red Bull half a second behind the British driver’s Mercedes.

After equaling his best ever F1 qualifying result, Ricciardo, who is enjoying the performance he can extract from the RB10, is feeling bullish ahead of today’s race with his eyes firmly fixed on securing his first podium finish.

The Aussie lost his second place finish at the Australian Grand Prix after the FIA dismissed Red Bull’s appeal over the disqualification at a hearing in Paris on Tuesday.

Ricciardo has already proved his battling qualities after winning a thrilling dice against Vettel to finish fourth in the Bahrain Grand Prix last time out.

“I feel like I’m ready to get a good result, I know it’s never going to be easy but I’m prepared for the fight and I’ll embrace it,” said Ricciardo

“I couldn’t have settled into the team any better to be honest, they made me feel at home very quickly and it’s helping me.

“I’m really enjoying the driving and it seems to be showing with the results. I’m really pleased. The team is closing the gap to the front and we’re getting better each race.”

Meanwhile, Vettel, who will start from third on the grid, has admitted his younger team-mate is quicker than him behind the wheel of the RB10 at this stage of the season.

The statistics from the season so far further endorse the German’s statement with Ricciardo clearly leading the head-to-head intra team battle after four races.

“This year is very, very different, the cars are different, you cannot compare last year to this year,” said Vettel

“Daniel is doing a very good job. He has not had one good weekend, he has had [consistent] good weekends.

“So far he is able to get the maximum out of the car, and on my side, maybe I am struggling a bit more.

“But at the end we have the same car so if he beats me he beats me fair and square. That is not to my liking. Equally I know I have to do a little bit better.”

*Ricciardo finished second before being disqualified from the Australian Grand Prix and qualified 3rd in Bahrain but started 13th after a 10 place grid penalty for an unsafe pit release during Malaysian Grand Prix.