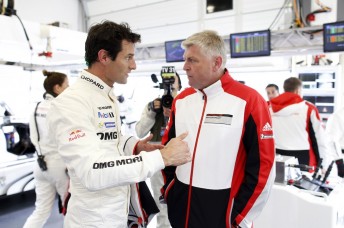 Webber is sharing the Porsche 919 Hybrid with the experienced Timo Bernhard and Kiwi flyer Brendon Hartley as the trio will start the 6 Hour race from sixth on the grid.

Porsche has logged an impressive 3556km in testing ahead of the WEC opener this weekend with its LMP1 racers.

It is a package which Brabham is convinced may have an edge over the diesel units from Audi.

The Ingolstadt-based Audi has with the exception of the Bentley Speed 8 (with close links to Audi) in 2003 and Peugeot (spearheaded by Brabham) in 2009 won every Le Mans 24 Hour race since the year 2000.

Audi has recently voiced its concerns over fuel penalties for its R18 e-tron quattros which has seen its tank capacity reduced from 54.8litres to 54.3.

At the same time the Toyota TS040 and Porsche 919s have been given crucial freedom with its tanks raised to 68.3litres from 66.9litres.

“I’m fascinated to be honest to see how the Porsche is going to fare against the Toyotas and Audis because all of them would have taken steps forward over the winter,” Brabham told Speedcafe.com

“Mark’s (Webber) a pro. I don’t really know how he is getting on but I can only assume he’s doing well.

“He is one of the top drivers and he’s got good drivers who are used to sportscar racing and I’m sure he will learn off them as they will learn off him.

“Audi have done a fantastic job at managing their domination for so long with their technology this is now taking another step.

“There are some different ideas about the regulations and the technology that teams use.

“Having spoken to a few different people, they think what Porsche have come up with might be the best in the long run. So it will be interesting to see how that pans out.”

Brabham says that whether Porsche can shine on debut remains unvalidated because they have not yet been under race pressure with the LMP1s.

“As far as Porsche is concerned, all they’ve done is tested up until now,” Brabham said.

“They have never put themselves under the pressure of a race and how the pit stops are going to go, the strategy etc.

“I’m sure they have got very good people but sometimes it takes a while for the team to gel.

“They have been around a long time, it could go either way to be honest.”

*Coverage of the opening WEC round is on Speed Channel from 8.30pm

Previous Story Toyota on pole with late flyer at Silverstone