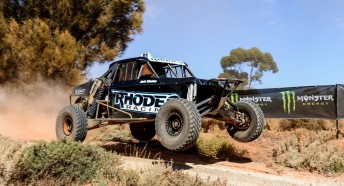 South Australian Jack Rhodes leads the way at the inaugural Kalgoorlie 400 in the opening round of the Australian Off Road Championship.

The #91 Jimco racer Rhodes, crossed the finish line fastest in section 1 with a time of 57:32s.

However Robinson had to settle for second fastest on the timesheets, 54s behind Rhodes but 14s ahead of his brother Beau Robinson who finished third in the #413 Tonka Geiser Bros Trophy Truck.

Reigning champions Shannon and Ian Rentsch finished fourth in the #1 Hogs Breath Pro Buggy while Queenslander Tony Fehlhaber (#138) rounded out the top five being the first of the Prolite racers home.

Queenslander Colin Hunter had earlier been unable to finish his Top 10 Shootout lap due to locking up brakes at the finish-line tyre chicanes, but salvaged his Section 1 result to come in ninth ahead of 2013 series runner-up Hayden Bentley.