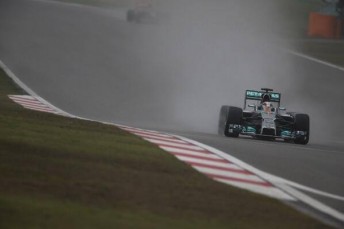 Lewis Hamilton on his way to pole

Lewis Hamilton produced yet another wet weather masterclass as he stormed to pole position for Sunday’s Chinese Grand Prix.

The Mercedes driver proved to be the class of the field in tricky wet conditions at the Shanghai International Circuit with his 1m53.860 effort almost six tenths of a second quicker than Red Bull’s Daniel Ricciardo.

The Australian was the only driver to pose a realistic threat to Hamilton as he claimed his second front row starting position of the season.

The 24-year-old was once again quicker than his world champion team-mate Sebastian Vettel, who was third fastest.

Heavy rain prior to qualifying provided tricky slippery conditions with teams forced to decide between wet and intermediate compound tyres.

The weather failed to hamper Hamilton, who dominated the entire qualifying session as he topped the times in each of the three segments.

Team-mate Nico Rosberg appeared to buckle under the pressures with the German making two costly errors in Q3 which left him in fourth position. Rosberg locked a wheel and suffered a spin in the dying minutes.

After starring in free practice, Fernando Alonso could only secure fifth on the grid for Ferrari ahead the Williams duo of of Felipe Massa and Valtteri Bottas.

Ferrari’s Kimi Raikkonen produced the surprise of Q2 as he was unable to replicate the pace of his team-mate and he subsequently missed out on the top 10 shootout for pole by eight tenths of a second.

Meanwhile, McLaren struggled to adapt to the conditions with Jenson Button and Kevin Magnussen failing to progress to the final part of qualifying. The pair will start from 12th and 15th on the grid respectively.

Esteban Gutierrez was the biggest name to fail to progress to Q2. He joined both Caterhams and Marussias, along with the Lotus of Pastor Maldonado, who sat out the session after encountering problems in final practice.

See below for Speedcafe.com’s expert guide to the Chinese Grand Prix.

*Stay with Speedcafe.com for all the latest news from the Chinese GP this weekend