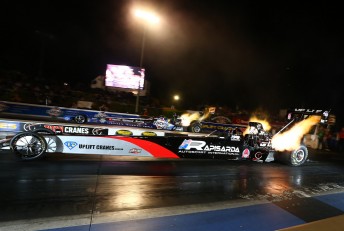 West Aussie Allan Dobson has claimed an emotional Top Fuel A Final win at Willowbank Raceway for Rapisarda Autosport International in the event that pays special homage to the late son of his Team Principal Santo Rapisarda.

Dobson defeated defending Champion Steve Read  in the A Final after each punched out consistently strong passes across the evening, with Dobson taking the win courtesy of a 4.677 second pass at 312.42mph.

“It was a terrific night, the crew and the crew chief Santino, they really got the tune up going well and their workmanship was fantastic, and they are really A Class this meeting, I am very proud of them and I hope they are very proud of themselves,” said West Australian Dobson, who has raced for the Rapisarda team for many years.

“The car went flawlessly, because it is such an emotional race meeting for me being Louie’s memorial and for me wanting to try and win it for Santo I was very conscious of not over-doing it and mucking up, so I just let the love and the passion work for me,” said Dobson.

“It was an honour to take the trophy for Santo’s beautiful son Louie who passed in 1990. I just really want to thank Santo for supporting the sport and allowing me to drive that great race car in such an important race meeting that means so much to him.”

The Top Fuel B Final saw Damien Harris beat Phil Lamattina on an exhibition pass when there was no fourth quickest winner from the field.

In Titan Cranes Top Alcohol, local racers Debbie O’Rourke and Gary Phillips faced off in the A Final.

With both racers overcoming issues throughout the evening. 17-time national champion Phillips lived up to his reputation, blazing down the quarter-mile with a 5.619 second pass at 239.91mph to take the win while O’Rourke spun the tyres off the start to abort her run early.

“On the first run I hit the centre line after picking the front wheels up, but before that it was so close to having a great run so we left the set-up for the second run and headed into that one knowing it was a ‘must win’ as John (Cannuli) can run well – we went out there and ran our own race and it responded just as it should,” said Phillips.

“It was then on to the final and it all worked out well – it didn’t hurt anything and I was able to keep that engine alive, which is what Lucas Oils pays me for!” laughed Phillips. “The team and I are now looking forward to tomorrow, there will be more of the same and some great action, so everyone should come out to Willowbank Raceway!”

In the Titan Cranes Top Alcohol B Final Steve Reed took on Steven Ham, with Ham taking the win courtesy of a blistering 5.525 second pass at an amazing 263.31 miles per hour (approx. 423 km/h).

The action will reset tonight at Willowbank for another round of the 2014 ANDRA Top Fuel and Top Alcohol Championship.

Next Story Double double-ups at Willowbank