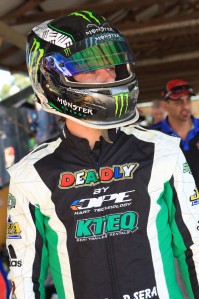 David Sera’s on fire in Newcastle

David Sera moved a step closer to a record breaking 16th Australian Karting Championship during qualifying at the National Championships in Newcastle on Friday.

Sera, who’s currently sits equal with John Pizarro at the top of the all-time winner’s list in Australian karting, set the pace in both the Clubman Heavy and X30 light classes.

Sera’s pace in Clubman Heavy was nothing short of impressive with a fastest time nearly three-tenths of a second clear of his nearest rival Luke Marquis.  He then went on to claim a comprehensive victory in the opening heat race on Friday afternoon.

If successful in continuing his winning form, Sera will not only move to the top of the Honour Role but also become the first driver since William Yarwood in 2001/2002 to claim back-to-back Championships in the class.

After starting from pole position and leading the early laps, Sera crossed the line second in the opening heat of X30 Light.

“It’s a great start to the weekend, but I’m fully aware that there is still a long way to go before the Champions are crowned,” said Sera, a 15-time National Champion.

“I was able to get a good lead early in heat one of Clubman and then in the X30 heat I conserved a bit to see where I’m at compared to the rest of the field.

“There’s not a lot of passing opportunities on this track, so it is important to get some good results in the heat races to ensure you’re right up the front for the finals.”

Racing continues on Saturday with the remaining heats and pre-finals to be contested.  The Championship Finals will be held from 8:30am on Sunday.