Champion Audi Sport team have struck the first blow in defence of its title with Lucas di Grassi producing the best time in Free Practice 2 for the opening WEC round – the Silverstone 6 Hour.

di Grassi made his presence felt immediately after coming into the team to join Tom Kristensen and Loic Duval after the retirement at the end of last season of Allan McNish.

Toyota continues to show improvement with the TS040 Hybrid of Kazuki Nakajima third best in 1:44.097s.

Mark Webber was finally back in harness after not racing since the Brazilian Formula One GP last November to put the #20 Porsche 919 Hybrid fourth best in 1:45051s. 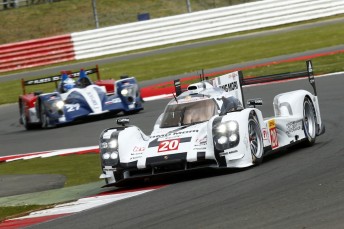 Rounding out the top five in the LMP1 class was the Rebellion Lola-Toyota B12/60 with Nick Heidfeld clocking 1:45.346s.

LMP2 was topped by the OAK G-Drive Morgan-Nissan with Olivier Pla pulling out a 1:50.401s lap.

Webber was satisfied with Porsche’s first day of competition back in the LMP1 class which has validated its recent strong pace at the Prologue runs at the Paul Ricard circuit in France.

“Operationally it was a very rewarding day for the guys with two smooth sessions with both cars, which is very important for us at this early stage,” Webber said.

“With every lap we do we’re learning a lot.

“We’ve got some performance to find, but we know what we need to work on

“I always love driving here at Silverstone, it’s a beautiful track and it’s great to be back here again with a roof over my head for the first time since 1998.

“I am used to having better visibility in the F1 car, so that was something to get used to as with the closed cockpit the visibility is a bit more restricted.

“I have already got a little bit of that endurance feeling, with a lot of different little things which I have clocked in my memory. I’m still a bit of a rookie to be honest, but I’m really enjoying it.“

Earlier in the closing minutes of Free Practice 1, Germany’s Marc Lieb pulled out a 1:44.042s lap to go fastest in the #14 Porsche 919 Hybrid who shares with Neel Jani and Romain Dumas.

Both Webber and Dumas did not take part in FP1.

See below for full times of Free Practice 2

*For all the latest WEC coverage stay with Speedcafe.com