Anthony blazes to record lap in F3 win at Bathurst

Anthony blazes to record lap in F3 win at Bathurst 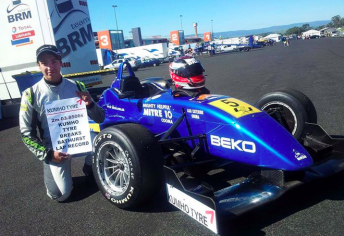 Teenager Chris Anthony blasted his way into the record books by setting a lap record during his opening race victory in round 3 of the Formula 3 Australian Drivers Championship at Bathurst.

The 18-year-old Anthony shot into the lead from polesitter Simon Hodge on the opening lap and was never headed.

In the process he surpassed Shane van Gisbergen’s outright lap record in claiming his maiden win in the wings and slicks class.

“It’s a big thing… It’s just massive! I can’t comprehend it all at the moment,” Anthony said.

“I can’t thank everyone back at Cooma enough for supporting me. We put on these fundraisers, sausage sizzles, and the whole town comes down to support us and it’s incredible.

“We’re doing this on a budget, round by round, trying to see if we can get to the next one.”

Ben Gersekowski finished second, working his way from fifth position at the start to third early in the race.

He then set out after the runaway leader and lapped traffic helped close the margin to less than four seconds at the line – but ultimately the Queenslander was happy to gain points on his nearest title rival.

After walking away from a 5G crash in practice yesterday his effort was a stout comeback.

Hodge had a quiet race to third, but maintains a narrow one-point title lead heading into tomorrow’s second race of the round.

Arrie Maree was involved in an early battle with Chelsea Angelo and Garnet Patterson before clearing the warring Forpark National Class rivals, finishing a solid fourth but setting lap times equivalent to the leaders by the end of the 12-lap affair.

Patterson and Angelo had one of the battles of the race, swapping positions regularly in the fight for the National Class victory.

Patterson made a superb start and sat third on the opening lap, before he was chased down by Gersekowski and Maree in the early stages.

He would hold it for two laps before Angelo would work her way past again before ultimately holding on for the class victory.

AGI Sport driver Nathan Gotch scored the outright lead in Formula 3’s Kumho Cup, a strong performance to seventh outright giving him the class victory ahead of the ever improving Roland Legge and Dennie Rumble.

See below for result Race 1