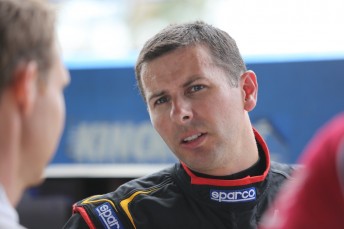 Gold Coast-based Steve Owen has scored a call-up to the BNT V8 SuperTourers round on the undercard to the bumper ITM 500 Auckland meeting at Pukekohe on ANZAC Day weekend.

The accomplished Owen will take command of Wayne Anderson’s Holden Commodore which was formerly driven by Andy Booth.

Owen has had four seasons as a full-time V8 Supercar driver and has twice won the Supercars Development Series.

The 39-year-old is in great demand as a co-driver for the long-distance races and in this role in 2010 he shared a race win with Jamie Whincup at Surfers Paradise and finished second in the Bathurst 1000km race.

Last year he and Will Davison finished third in the Sandown 500 race, driving for Ford Performance Racing.

“We want to get the car out there for Pukekohe for the Supercar meeting and I wanted to have a good driver.”

The car has not raced yet this season, but Anderson is planning to field it in the endurance races later this year.

Anderson toyed with the idea of putting young Kiwi Nick Cassidy, twice winner of the Toyota Racing Series and NZ Grand Prix, in the car but Cassidy is in Europe trying to organise a single-seater drive.

“He drove Murphy’s car at Taupo (2012) and he was fast. He won an endurance race there (with Jack Perkins),” Anderson said.