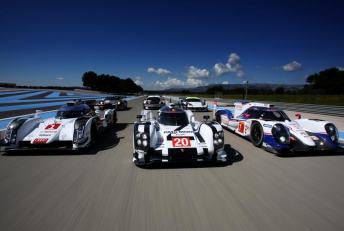 As Mark Webber returns to his first competitive drive of a prototype sports car since 1999 this weekend, we look at the technicalities of the FIA’s #1 sports car championship.

Often described as F1 cars with mudguards, the WEC prototypes and its regulations and racing formats are totally different animals to grand prix racing.

Ahead of Webber’s comeback to prototype racing, the sections below are an overview of what makes the WEC tick.

CLASSES THAT DEFINE THE WEC
The FIA is comprised of Le Mans Prototype cars (LMP1 and LMP2) and Le Mans Grand Touring Endurance cars (LMGTE Pro and LMGTE Am).

LMP1 is split into two classes, LMP1-L for privateer non-hybrids and LMP1-H for hybrid-powered cars.

As the light cars (L) have no Energy Recovery System (ERS), the FIA limit the amount of fuel in accordance to the used electrical boost, so that both can compete in the same category.

LMP1 cars are only driven by professional racing drivers and are marked by red stickers.

The LMP1 powertrain for 2014 is based on efficiency and fuel consumption meaning no limit in air restrictor, boost pressure and engine capacity.

Their minimum weight depends on whether they have hybrid technology (LMP1-H 870kg /LMP1-L 850 kg), compared to an F1 car which has a minimum weight of 691kg.

The LMP2 category is reserved exclusively for private teams that are independent of manufacturers and/or engine suppliers and race in blue stickers.

LMGTE Pro cars can be used on open roads and are driven by professionals only.

These cars are identified by green stickers. LMGTE Am consists of gentleman and professional drivers and the cars are at least one year older than the latest LMGTE Pro specification cars.

These cars are identified by orange stickers.

At Silverstone, the race distance is over three and a half times that of an F1 race.
WEC calendar
The race calendar includes Silverstone, Spa-Francorchamps, Le Mans 24 Hour, The Circuit of the Americas, Fuji, Shanghai, Bahrain and Sao Paolo.

WEEKEND SCHEDULES
These differ according to whether the race is on Saturday or Sunday.

At Silverstone where the race is on Sunday, there will be two free practice sessions on Friday, FP3 and qualifying on Saturday before the race the following day.

In contrast, the race at Shanghai is on Saturday and as such there are two practice sessions and qualifying on Friday.

The only anomaly is Le Mans which holds practice sessions a few weeks before the race to aid the teams’ preparation.

There is a further practice session on the Wednesday before the race ahead of three two-hour long qualifying sessions spread across Wednesday and Thursday with fastest lap time achieved taking pole.

The 24hr race starts at 3pm on Saturday afternoon.

In qualifying for all races except Le Mans, two drivers from each crew must set at least two timed laps and the average of the four best lap times (the best two of each driver) will serve as the reference time for establishing the grid.

DRIVER CHANGEOVERS
In terms of driving time for the LMP1 category, to be able to score points, a driver must imperatively drive for a minimum of 45 minutes during the race.

A driver may not drive for more than four hours and 30 minutes in total.

At Le Mans double points will be awarded.

Points for the Manufacturers’ World Championship will only be scored by the highest finishing eligible car entered for the FIA WEC and entry is limited to a maximum of two cars per group, however for Le Mans only, the LMP1 manufacturers may enter a third car.

PIT STOPS
In the FIA WEC the number of people in the pitlane is very strictly controlled.

As in F1, they all have to wear fire suits and helmets or at least fire suits, balaclava and goggles.

In endurance racing every car will refuel when it stops and – depending on strategy – most will leave driver changes to coincide with tyre changes as that takes longer than a fuel-only stop.

As the driver comes into the pits he’ll be told to go through his team’s procedures which are usually to unplug radio connection, disconnect his drinks system, loosen his belts – but not undo them until he has stopped otherwise he can get a penalty – and any other specific instructions from his team.

Everyone has to stay behind the solid white line in front of the garages until the car has come to a stop, and no equipment is allowed over the line until it stops.

On stopping, the driver must switch off the lights, cut the engine and undo his harness.

The roles of the team are as follows:

*Stay with Speedcafe.com for all the latest news from the WEC season opener at Silverstone