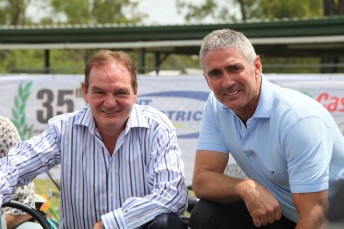 At the end of 2013, the karting movement underwent one of the biggest overhauls in its history by switching to a Liability Limited company structure.

One of the biggest names to lend his support to the new organisation is five times 500cc world champion Mick Doohan, who is the chairman of Karting Australia in his new guise and also acts as Competition Director.

Speedcafe.com caught up with the motorcycling megastar about his plans and visions for the future of the grassroots sport.

SPEEDCAFE: Mick, can you explain your role within the newly re-named Karting Australia organisation?

Mick Doohan: My official role is Competition Director and I am also currently the Chairman. The Directorship that I sit around encompasses exactly what it outlines – first and foremost, the Competition side of the sport.

SPEEDCAFE: What led you to be involved in karting from an administrative point of view?

Doohan: I’ve been involved with some other motorsports on the administration side – motorcycling, Rally Australia and now with the Grand Prix Corporation here in Australia.
And with my son (Jack) being involved as a competitor, when there was a new structure of the Australian Karting Association coming about, I thought it was a great time to put my hand up and try to offer my support.

Thankfully, we have a great bunch of people in the new six-person board of the Association and Kelvin O’Reilly as part of the structure as chief executive.

Hopefully we can try to give back to the competitors and the sport by drawing upon a little bit of the experience that we’ve all gained over the years.

As you’re saying there is some fresh eyes that has come to the sport such as Kelvin O’Reilly (former TEGA and Australian Super Touring boss) and Bathurst winner Jason Bargwanna.

SPEEDCAFE: So this structure is a total shift away from the way in which the sport of karting has been run traditionally in Australia? 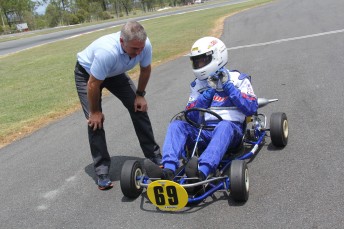 Doohan: That’s correct, it is fantastic that the old Association recognised that they were getting to a point where it was bottlenecked and not a lot of decisions could be made.

For the karter, hopefully he or she won’t feel or see any difference, apart from perhaps a better experience and over time, more laps and more value for their dollar.

SPEEDCAFE: For you, this role is a little unusual to be an administrator for an entire sport. You’ve been a competitor at the highest level, you’ve been involved at manufacturer level (as Grand Prix Advisor to Honda Racing Corporation) – is that an interesting challenge that you enjoy taking on?

Doohan: To be honest, I don’t try and complicate things and think too much about it.

I put my hand up for the role so that some of the experience that I’ve gained over the years could be useful in a sport which is a ground roots sport like karting.

If I can offer just a little bit of insight into some of the areas that could perhaps be – I wouldn’t say fixed, but I would say made a little more convenient for the competitors – which was my main reason for getting involved.

SPEEDCAFE: The pathways to getting from karting in Australia to other forms of motorsport here and internationally could be seen as somewhat blurred. Do you see a primary charter for Karting Australia to improve those opportunities for youngsters coming through?

Doohan: That’s a very large question to answer at any level.

Karting in any country is the foundation level for a motorsports career pretty much full stop these days.

Certainly, we’ve spoken about it and we’re trying to put in a clearer pathway to try and guide people into the next level of motorsport.

But you know it’s not an easy task, it is an on-going battle through whichever channels we take.

Thankfully through the FIA and CIK (karting’s peak global body), CAMS here in Australia and ourselves, we’re all trying to work together to identify those paths and perhaps make them a little clearer for people who aspire to do that.

SPEEDCAFE: The Castrol EDGE CIK Stars of Karting is growing year-on-year. That is obviously the major stepping point for the future into other forms of motorsport?

Doohan: It is certainly one of the elite Series in that side of karting that is currently running, so too the Rotax Pro Tour – both of which have gained a lot of momentum over the last few years.

But certainly you would think the CIK Series looking back years ago, it was what produced a lot of the current generation of high profile Australian drivers.

Nothing’s certain at the moment, but the CIK Stars of Karting is certainly the elite championship and we’d like to keep it that way.