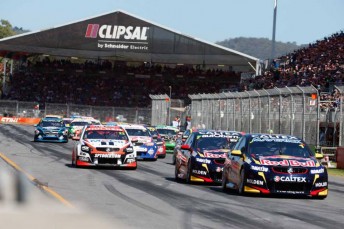 The much maligned AZ restart system has been scrapped with V8 Supercars going back to the 2013-spec procedure.

Following the incident which saw Jason Bright’s BJR Commodore pitched into a barrel-roll before slamming into the catch fence after a restart in Adelaide, the system has been a bone of contention within the sport.

As from the ANZAC Day ITM 500 Auckland meeting at Pukekohe which will feature four races, the safety car will pace the field under restart rules without the difficult-to-manage AZ (acceleration zone) area.

The field will now, as per last year, assemble behind the Safety Car in a single line before the Safety Car peels off into pitlane when a race is deemed clear to restart.

Drivers and team owners have been particularly vocal about the AZ system which had lead to some potentially dire incidents in the pursuit of a better spectacle.

“It is a shame though, when it did work it looked great with the cars spreading either side of the queue on the jump,” Kelly said.

“The problem was whether it’s an overlap or passing rule prior to the control line, more often than not there will be someone that doesn’t get the jump causing the car behind to brake and, in turn, cause issues.”