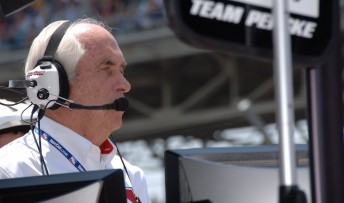 V8 Supercars continues to play a pivotal role in assisting Team Penske’s possible pathway into the championship in 2015.

One of the most successful racing organisations in the world, the Charlotte-based Team Penske is undergoing an exhaustive analysis of how it can expand into the Championship Series.

Critical to any move is whether Team Penske can put together a business case that stacks up ahead of a takeover of an existing team as has been mooted in the past with Dick Johnson Racing or FPR.

V8 Supercars has also confirmed that the question of what manufacturer Penske would align itself to has been discussed, but it admits that this is an area the category can offer little assistance to what is a heavily connected bluechip automotive player.

Part of the Penske empire is the Penske Automotive Group (nee United Auto Group) which is a chain of dealerships that sells up to 40 brands with its share price on the New York Stock Exchange listed at $42.00.

V8 Supercars chief executive James Warburton said his category is continuing to supply a flow of information to Penske amid rumblings of expanding its operations to Australia.

“We’ve been mainly talking through Tim Cindric (Team Penske president) and providing information around the category for him and what the plans are and where things are at,” Warburton told Speedcafe.com

“(and) some relativities around operating budgets and the like.

“All the manufacturing relationships are with teams.

“I don’t think there is a better organisation placed in the world in terms of the manufacturing relationships Penske holds so I don’t think we can assist them any more with any manufacturer.

“Obviously we’ve spoken about it but they are one of the largest automotive dealers globally with relationships with 40-odd manufacturers.”

Cindric told Speedcafe.com that any decision on whether it proceeds with V8 Supercars plans will not be made until after the Indianapolis 500 on the last weekend in May.

It is expected that Cindric and Roger Penske will spare some time leading up to the Indy 500 to evaluate whether or not to press ahead with their venture.

Warburton said it would clearly be a boon for the championship if Penske’s involvement comes to fruition.

“Obviously there wouldn’t be a championship in the world that wouldn’t want the Penske organisation to be a part of it,” he said.

“Our role is to really support the teams and support a path in.

“And that is obviously what we’ve been doing.

“We’ve been sitting back talking about the category and where things sit and trying to assist where we can.”