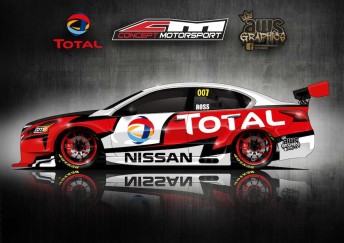 The NZV8 Touring Cars Championship team, Concept Motorsport, has confirmed that it will switch to a Nissan Altima TLX for the 2014-15 series.

The Altima which will be piloted by Nick Ross will be on show at the Pukekohe V8 Supercars round on ANZAC weekend where the NZV8s will conduct their final round of the current season.

“We were given an opportunity too good to pass up so we went for it and we are very much looking forward to getting the car on the track in the new season,” Ross said.

“The support that Concept Motorsport has received from Nissan Motorsport Australia has been outstanding, with technical advice and invaluable help with various aspects of the build.”

Ross maintains second place in the current championship where he is campaigning a Total-backed Commodore.

He trails leader and defending champion Jason Bargwanna (Toyota Camry) by 59 points going into the Pukekohe decider with a total of 300 points on offer.

“Working with the team on putting this car together and while at the same time concentrating on winning a championship has been hard work but it should all be worthwhile in the end especially if I can put that number one on the new car.” he said.