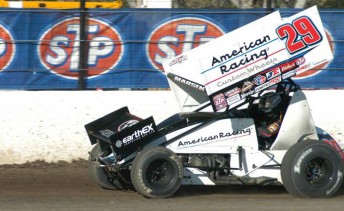 Taking your second World of Outlaws STP Sprintcar Series victory of the year is one way to remember your 14th Wedding Anniversary, but staving off challenges from Steve Kinser, Donny Schatz and Daryn Pittman made Kerry Madsen’s win at El Paso that little bit sweeter.

Starting from the pole at the race in El Paso, Texas, Madsen led the early goings – but all of the action was going on behind. Firstly, it was Schatz who advanced into third to see a yellow wave for second placed Jason Sides, who spun.

Then Pittman brought himself into proceedings behind Schatz only to see the legend Kinser sweep past both of them. Another caution flew bunching the field once again.

On the restart – with Madsen oblivious to the action behind – Schatz knocked the STP/ARMOR ALL Tony Stewart Racing machine out of gear and ground to a halt.

This left Kinser as the one with the big opportunity to take the fight to Sydney-sider – Madsen, who drives a West Australian-owned Keneric Racing car.

Pittman had his own battle going on for the minors, with Kasey Kahne Racing team-mate – and Outlaws form man – Brad Sweet battling for third position.

In the end though, Madsen held on from Kinser with Pittman elevating himself to the top of the points ladder through beating home Sweet.

“It feels bloody fantastic,” said Madsen. “These races are so hard to win, and there are so many good cars and even though you’ve got a good starting position it really doesn’t mean anything. The track was fantastic because there were so many lines that it was actually confusing because you didn’t know which lines to pick. Every restart I couldn’t do what I did in three and four. (Wife) Tina definitely brought a bit of luck and we’ll have to bring her to more races for sure.”

Pittman leads the World of Outlaws STP Championship by five points from Paul McMahan with Schatz a further point back in third. Madsen is now sixth on points, trailing Pittman by just 71.