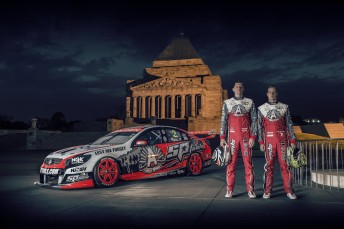 Holden’s 2014 ANZAC-inspired livery it will run at Pukekohe

The Holden Racing Team Commodores will pay tribute to Australia and New Zealand service men and women with one-off ANZAC-inspired livery for the Pukekohe meeting.

Playing on its tribute on V8 Supercars’ return to the Pukekohe circuit over the same weekend last year, HRT has tweaked the design for 2014.

The #2 car of Garth Tander and the #22 of James Courtney will see the lion and driver logo move aside for the RSL’s ANZAC Appeal Rising Sun logo on the roof and door of the cars.

The front-quarter panel now features a silhouette of ANZAC diggers, along with the words of remembrance ‘Lest We Forget’.

The ANZAC Appeal logo will also be printed on both HRT drivers’ race suits, which will be auctioned off after the event at Pukekohe with proceeds going to the RSL and its New Zealand counterpart, the RSA.

“To unveil our tribute at the iconic Shrine of Remembrance in Melbourne makes it even more special.”

HRT managing director Adrian Burgess said: “The Spirit of ANZAC is held sacred by all Australians – so it’s great that we can pay tribute, and raise awareness, by racing with a special ANZAC Appeal livery in New Zealand.”

The Pukekohe meeting will run at the fast south Auckland circuit from April 24-27.