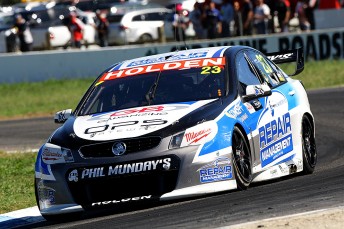 Russell Ingall’s abusive tirade at being handed a black flag at Winton has triggered an avalanche of comments from fans.

A large portion were supportive of Ingall’s outburst that was sparked in the wake of the veteran racer pushing David Wall’s #17 Ford into a spin.

After a lengthy inquiry, Ingall was fined $15,000 for his actions which fell under the clause ‘conduct prejudicial’.

He apologised on national television on the grid before the start of the final 200km race at Winton after a day earlier suggesting officials should be hauled before the fans in a statement that was directed at inciting aggression.

While Ingall was remorseful of the way in the way he chose his words, he intends to remain opinionated if future issues arise.

Should drivers be more active in voicing their opinion rather than sticking to the clinical PR line and/or stick their hands in the sand?

Register your say in the poll below.